Archive for the ‘Social Networking’ Category

What Can YOUR Community Do?

55 percent. That’s nothing to joke about, and it resonates with us, as we’re sure it does with many others in our space.  Our Founder and CEO, Sang Kim, saw the power and passion created by communities when he founded MomJunction, just as our employees and partners do today.

Online communities aren’t just websites which aggregate nameless and faceless people around common interests.  They’re virtual meeting points, virtual mixers, virtual support groups and virtual watercoolers.  What’s interesting, though, is when the boundaries between “virtual” and “the real world” get broken down.

56% of community participants meet their digital counterparts in the real world, and as stated above, 55% feel as strongly about their online communities as they do about the ones they belong to “in the real world”.

We regularly see members of our communities talking about how much they love the interactions, love the people, and love the online space they’ve created.

We provide the platform, but it’s the users that make the community come alive.

Often times, those users band together to throw events, put on a charity fundraiser, support a fellow member in a time of crisis, or even promote members of the community in the real world.

When we ran across this video from Ophrah’s 24th Season launch, we immediately thought about how the people in that crowd are much like our community members.  All very different, all with their own unique likes and dislikes, but all coming together to participate in something that has the potential to be something greater than the sum total of the parts. Not to mention, it’s a really cool effect.

What can YOUR community come together to achieve?

We’re Addicted to Our Friends

Sometimes, you hear something and you know it’s absolutely right. You don’t need proof, because it simply makes sense.  Done.

Sometimes, all of a sudden, you find proof.

This thought crossed my mind when I came across a research report on eMarketer, compiled by Beresford Research, covering “Use of Online Social Networks”  The title sure ain’t all that sexy, but this is what struck me:

So, ask yourself, what do you enjoy more than being with your friends?

This small data point offered me some proof to what I heard back in the spring from Tim Young at the Inbound Marketing Summit in San Francisco.  What Tim said is something that I’ve been repeating ever since.

Tim is Founder & CEO of Socialcast and a very smart guy.  His gave a short speech in SF about Collective Creativity and Generation Y, and here’s the sound bite that struck me:

Think about it.  He’s right.  (And now he’s got the research to provide it).

For marketers looking to engage on Facebook, I think that creates a (maybe not so) small hurdle, because what users are there for could be just about anything.  Therefore, marketers may have a hard time being relevant.  But that’s a story for another day.

Today, I’ll look to hear something smart from Tim, because he and I are both speaking at the Inbound Marketing Summit in Boston.

Our CEO, Sang Kim, recently spoke on a panel entitled: “Joining the Party: Publishers Can Play and Prosper in the Social Media Sandbox” at OMMA Social.

In 2009, social networks like Twitter and Facebook evolved from “brand extensions” and “outreach” for major media into established publisher outposts that can drive traffic, user interaction, and now even ad revenues. But what best practices have emerged for managing these new syndication and relationship engines? This panel will look at issues including who mans the feed, who creates policies for maintaining voice and editorial consistency, and whether social nets are seen as an editorial operation or a way to market media brands. Lastly, this panel will give insight into whether social networks offer traditional content providers a new way of thinking about their own content and relationship to their audience. Last year, publishers scrambled to “plug into” the nets. This year they have to harness the energy.

The panel focused on how publishers can use social tools to enhance their business objectives and what best practices have emerged through publisher activity so far.

The video of the “advice” question is below (5:30 in length), and some quotable excerpts are contained below.

“Social media a year and a half ago was a curse word. Now everyone’s embracing it” – Joe Porcilini, seekingalpha

“Within 15 minutes the critics were our marketers.”– Karl Lavin, Forbes

“Give the users a voice” – Sang Kim, Ripple6

“You have to add value to the user. That’s why they’re going to come back to your site” – Alan Levy, BlogTalkRadio 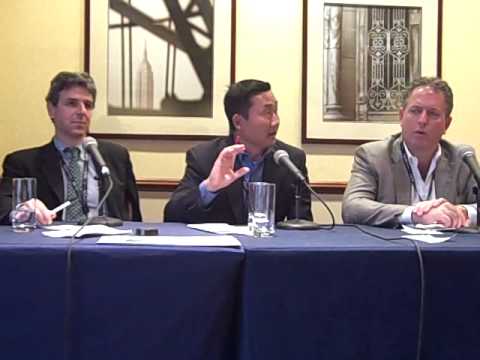 In a blogspotting article by Business Week, the results of a social commerce study on myYearbook were revealed.

This study revolved around the interaction of social media and e-commerce, which has yet to reach its full potential and gain widespread traction (though some notable exceptions exist, including Zappos and Dell).

A few things become clear when reading the results

We believe that the payoff for consumer adoption of social shopping can have huge impacts to  bottom-line revenues, even for small ticket items in the short-term.

As you can see, the majority of social network users have not vetted purchase decisions with their online friends. But of the 17%, or more than 5,700 who have, their responses are surprising:

* 81% received advice from their friends and followers

* 74% of those who received advice were influenced by it

That is a huge statistic.  To translate these percentages into real numbers, out of the 30,000+ people polled, just over 4,000 were influenced by advice received from their personal network about a potential purchase decision.

E-Commerce companies and retailers may still be figuring our how to integrate their platforms with social media tools to socialize the buying cycle, but the potential is there, and the payoff could be huge.

My job as the Ripple6 Marketing Manager keeps me busy talking with many of our different departments.  I caught up with our VP of Professional Services, Geoff Merrick, yesterday afternoon to talk a bit about our new product offering, Ripple6 OnDemand.

Geoff and his team are responsible for the development and implementation of our products and this short video explains a bit about our new product from a technical perspective.